Doo Wop is a term coined by MAC (the Mid-Atlantic Center For The Arts) in the early 1990s to describe the unique, space-age architectural style that was common in the 1950s and 1960s that incorporated modern, sweeping angles, bright colors, starbursts, boomerang shapes, plastic palm trees, and angular wall and roof styles. (It was named after a music style popular at that time, sung by groups like The Turbans and The Ink Spots.) Other parts of the country refer to the Doo Wop style as “Googie” or “Populuxe” architecture. The first motel to reflect this style in Wildwood Crest was the Ebb Tide Motel at 5711 Atlantic Avenue, built in 1957. Many of the Doo Wop motels (including the Ebb Tide) were built by Will and Lou Morey, who specialized in such designs.

The different categories of Doo Wop architecture include:

1) Modern/Blast Off: Glass walled, angular roof style that brings to mind the jet-age airports of the 1950s and 1960s. (Satellite and Admiral Motels) 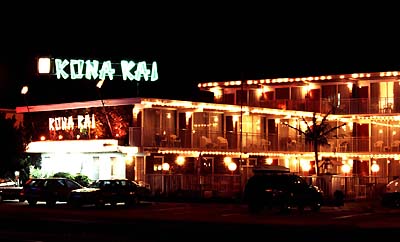 Satellite Motel 5909 Atlantic Avenue (1958). Original owners: Will and Jacqueline Morey.  Designed and built by Will Morey.  Doo Wop style: Modern/Blast Off.   (Demolished in October of 2004.)